Yi's Karate of Vineland is developing life skills that help kids in school, home, socially and so MUCH More in Vineland, NJ.

Welcome to our Yi’s Karate of Vineland website. We appreciate and look forward to the opportunity to serve you and your family. We offer martial arts programs for kids from 4 – 12 years old as well as programs for teens and adults. Master Instructor and 7th Degree Black Belt Chuck Vertolli and our highly skilled instructors are standing by to get you started in a program that is the perfect fit. We train in the traditional Korean martial art Tang Soo Do and through this traditional art, our programs are designed to develop confident and respected leaders for our modern world. Working hard to change and improve lives throughout our community we are honored to be “Partners in Education” with our local schools.

Master Chuck Vertolli started his martial arts training with Yi’s Martial Arts Institutes in October 1986 under Mr. Dwayne Reed. Master Vertolli moved to train under Master Martin Carson at Cho Dan Bo and has been training and teaching with him ever since. He began teaching at his own school in Vineland in 1998. He has won numerous trophies in tournaments, mostly in free fighting, most notable are; 1st place (3rd Dan Men’s Free Fighting) at the First IMA All European Championships in London, England in 2002, Grand Champion (Men’s Senior Black Belt Free Fighting) at the Garden State Championship in Woodbury, NJ in 2003, and 1st place (Masters Division Free Fighting) at the Second IMA All European Championships in Bedford, England, in 2007.

2008 Instructor of the Year

On March 28, 2009, Grandmaster Ki Yun Yi awarded the IMA 2008 Instructor of the Year to Master Chuck Vertolli. The presentation was made at the 33rd Annual Garden State Invitational Championships. The International Martial arts Association has more than 30 member schools in the United States and Great Britain. 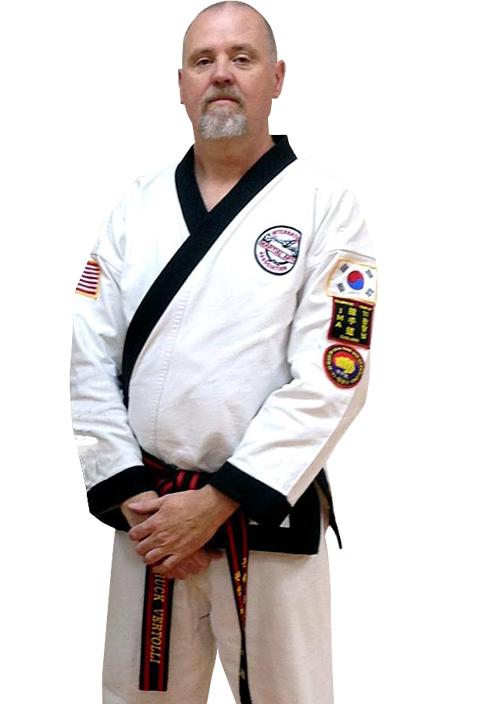 Why Choose Yi's Karate of Vineland?

Yi’s Karate of Vineland was named the Daily Journal’s 2018 Best of the Best Martial Arts School. We have been serving Cumberland and Atlantic counties since 1998 and continuously improve and enhance our programs and curriculum to offer you the best martial art and personal development program available. Our team is standing by to show you what we have to offer you and your family.

Yi’s Karate of Vineland is a full time, professional martial art school whose instructors are certified, well trained and active practitioners. Hand selected by our Chief Instructor Master Chuck Vertolli, our instructors are trained to meet the training needs of every student. In addition to the practice of Tang Soo Do, the head instructors are continuously conferring, consulting, and counseling with the best martial arts schools and instructors in the nation to bring the highest level of instruction, knowledge, and programs to our students and their families.

We offer instruction in Tang Soo Do, a traditional martial rooted in the traditional values of respect, self-discipline, and self-control and we add and our character and leadership programs that teach our students to achieve their goals, lead successful lives and serve their communities. Our students learn to be the best possible person they can become.

See What Our Community Members Say About Our Programs

Read All Of Our Reviews

For all of our surrounding community members in and around Vineland, NJ our Martial Arts academy offers a couple online website specials for first-time visitors. These special offers are only seen here and are only valid for first time website visitors.

*These are available only on our website. Not good with any other offers.

Your attention is required

Your attention is required

Please Leave Us A Review